Golgenna Angevin was a figure once viewed as a charismatic force inside of the Imperium, who has since been relegated to a footnote in history at best, and a traitorous wretch at worst. Millennia ago he was the figurehead who formed and spearheaded the Angevin Crusade, an ambitious expansion in the Northern Galaxy to claim the Ixaniad and Calixis Expanses, as well as bring the bulk of the Scarus Sector into the Imperial fold.

Although initially his efforts met with great success, partway through the pacification of the Scarus Sector, Angevin’s legendary charisma could no longer hide his apparent inept handling of the various Imperial forces under his command, and the entire alliance was on the verge of falling apart. It was in these darkest of moments that the legendary Saint Drusus rose to command of the Crusade, rallying the disparate forces inside of the Scarus Sector and unifying the area in Imperial rule before finally and triumphantly taming the Calixis Sector into the Calixis Expanse.

Angevin’s ultimate fate after the Crusade is shrouded in mystery. It is known he retired after the rise of Saint Drusus and died – if rumours are to be believed at the hands of the Officio Assassinorium – shortly thereafter. Despite his inglorious downfall, he is still widely respected inside of the Ixaniad sector, which holds both Angevin and Drusus in equal regard as the pair responsible for bringing them into the Imperial light. 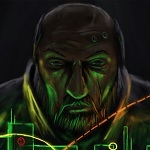