Youngest Hos Claimant. Possesses no desires save the Emperor's.

Last in line in the Hos Dynasty succession, he was never viewed as a strong contender for the Warrant, and in fact bowed out of the race early to take an Ecclesiarchical role within the Battlefleet Calixis.

Serving with distinction and honour, he possessed a carefree smile that belies the strength of his beliefs. These beliefs were impressed upon Jequin Hos at the time of the succession crisis, and Godwinne becamse the future Rogue Trader’s first ally in his quest to claim the Warrant for his own.

Generally a peacemaker inside of his family, with Jequin now having set off to the Koronus Expanse, he has remained behind to council his siblings and try to repair the fractured state that the family has been left in. 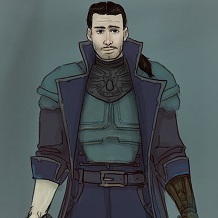