Dark Eldar who had usurped control of the Orks orbitting Grace

Unceasingly cruel like all members of his race, Calefas led his Eldar hunting pack on a campaign of terror in the Koronus Expanse for over a century, commanding from his Torture-class cruiser The Promise of Agony. Dozens of worlds burned under his sway, and a large outstanding bounty was placed on him, until he disappeared from sight for over two decades. It was assumed he had run afoul of something he could not defeat, but in reality he had become trapped in the Warp Storms surrounding the Grace system.

Once trapped there, uncertain of how long it would take for the storms to abate and aware that his ship could not be repaired if damaged in battle with the Orks, he instead somehow killed Warboss Toofgutz and used a Holo-Field to assume the identity of the deceased boss. Surrounding himself only with the weakest of Orks, he dispatched any challengers who would try to take control from him, and allowed his men to spread chaos and terror among the inhabitants of Grace.

In 826.M41 the Warp Storm surrounding the system finally abated, and the Hos Dynasty entered the system. Realising that this was a chance for fresh, unbroken slaves as well as liberation being at hand, he invited Jequin Hos and the remainder of the crew over presumably with the intent of incapacitating the captain and seizing his crew. Unfortunately the Captain’s cunning knowledge of Xenos and the impression of the Weirdboy Barka Da Squigcalla saw through his deception, and in a fierce battle the Dark Eldar Trueborn was slain. 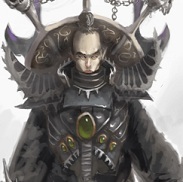