An Eldar that had hidden his consciousness inside of a mysterious gem, and sealed himself inside the casket of Saint Drusus that was held on Damaris. Upon having his containment chamber breached, the resulting energy drove Magos Hadron Shard mad and led to his death at the hands of Artifex Felicis and Navigator Maturinus – the latter of whom was brainwashed into seeing the stone as the preserved hand of Saint Drusus.

Warning the Explorator of the dangerous path he and his companions had set on, the Eldar pledged his support to the Hos Dynasty to guide them on a path to prosperity and fortune, pledging both his support and that of his mighty Cruiser – the Whisper of Anaris

Whatever this thing actually is, some things are certain. It can use psychic powers. It is skilled at illusion. Not only that it appears to have the ability to dominate the weak willed Explorator. It claims to be a dead Eldar xenos. I find his/her (?) claims highly suspect. It could be a pre-programmed psychic echo.

Nevermind what is, it should not be trusted. Attempting to bring a number of “gifts” to the Dynasty. It attempts to give Hos advice, I would advise with being every suspect of that. It could be a plant by Hos’ enemies, or if it is an Eldar they are mysterious in inscrutable. I would advise great caution against this deadly enemy. I will give the rock this though, it did help us when we were trapped, however his options involved weakening us. But our correct option, fighting the xenos to death lead to glorious victory. 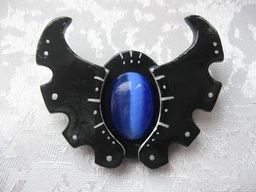