Trader of Food Stuffs, always on the lookout for reliable friends

A rather eccentric trader hailing from the Agri-World of Weyburn, his family has been looking to expand its interests, leading to a small deal with Lord-Captain Jequin Hos to deliver a quantity of his grain to Footfall to judge potential interest.

Both flamboyant and energetic, he puts presumably far too much energy into the re-selling of grain, but appears to be an honest, if earnest, trader.

He recently enlisted Zacharya Caine to aide Aurora Neena in her investigations. When it was revealed that she was actually a heretic working against the Imperium, he desperately offered a lot of money to the Arch-Militant in order to keep the matter quiet. 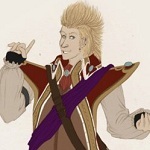