A Rogue Trader born in the Expanse. She fiercely defends her homeworld

The Orleans Dynasty is one that occupies a unique niche in the Koronus Expanse, as it is the first one granted to an Imperial family originated from inside of the Expanse. The world of Damaris was an experiment in extending Imperial influence into the Expanse, and as the Orleans family was instrumental in the initial foundation of the colony they were rewarded by the Imperial authorities of the Calixis Sector with a Warrant of Trade. Its powers are quite limited – any excursions into the Calixis Sector must be for the purpose of trade either initiated from or to their colony world, but nonetheless they are free to interpret that duty as however they choose.

Since the founding of the colony Imperial influence has not grown significantly from that point, and the Dynasty’s fortunes have failed to grow as a result. The Dynasty consists of a large number of trade transports, as well as a few Raiders for convoy defense as well as their ancient flagship. Lady Elizabeth Orleans is the latest to inhereit the family Warrant of Trade, and she has given every indication of being aware of how limited her authority truly is. Nonetheless, she is absolutely committed to the protection and expansion of her homeworld, and under her aggressive negotiation tactics the world of Damaris has recently started to grow for the first time in over a century.

Her awareness of politics in all levels of the Imperium seem unmatched, as she quickly picked up on the Imperial Navy’s reticence to send additional troops to Damaris in response to a potential Orkish invasion, and she persuaded the planetary government to offer lucrative compensation in exchange for other Rogue Traders pledging their defense of the system. At the moment, only two Rogue Traders have potentially accepted her offer – Jeremiah Blitz and Jequin Hos.

The battles in the Damaris system have seen that Lady Orleans is a very competent Rogue Trader. Not only can she lead her combat ships into battle, she has a large amount of political acumen. It appears that she has out maneuvered Lord Hos and forced him to accept the Governorship of Damaris. Although this doesn’t seem like a burden for us at this point, we are now in charge of keeping the planet safe.

It should be noted that she likely has many trade connections, and is a valuable asset and ally. She seems very receptive to the Hos Dynasty. Now with Lord Hos owning a planet that she trades to, I can only see the bonds of this alliance growing stronger and helping both parties. 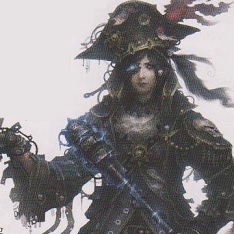