Shock troops of the In Purgatio Lumen. "Per aspera ad astra."

The unit of men aboard the In Purgatio Lumen dedicated to shock attacks and boarding actions. Earned their name in a boarding action against Chaos heretics 007.826.M41, three of their number engaging in personal combat with the Chaos-tainted commander of the Rending of the Innocent.

Following the Conquest of the Emperors Bounty, the Death Bastards again distinguished themselves in combat, but the exposure to the reanimated crew and the battle with the warp-possessed captain they have begun to show certain troubling aspects, but still remain exceptional shock troops in combat.

Update 007.826.M41, Author: Astropath Transcendant Eckhart
Recommend decoration for bravery for troopers Vasquez, Mercutio and Tybalt in recognition of their valour in the attack aboard the Rending of the Innocent in the system known as the Battleground. 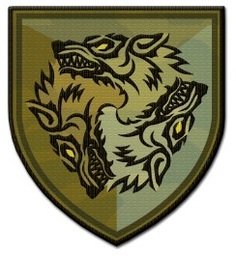