Military Man with a proud and noble stance. He might be a dick.

Proud and Noble, the Commander of the The Hand of Redemption towers over almost every human he meets, and instances of him backing down or showing subservient to anyone who’s not a superior of him in the Imperial Navy is so rare to be unheard of. Aware of how limited his authority is in the Expanse, he has dealt with this problem the way he deals with most of his problems – through bullying and intimidation. Though not an unfair man, he is proud and loyal to the Imperium and will brook no insult against them.

He encountered the party during The Salvation of Svard, where he arrived to investigate the disappearance of his brother Imperial Envoy Nathanial Kaal as well as the charges of heresy brought against the system. He and his Cruiser took part in the battle against The Whisperer, with his ship becoming critically damaged although he managed to triumph in the end.

It is uncertain if he is aware of the death of his brother. 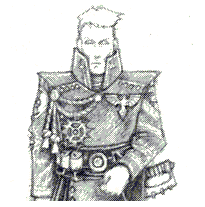