The Leader of the Honour Guard for Lord Captain Jequin Hos. Somehow.

Most House troops were diligently trained up by Zacharya Caine before being formed into the various Hos Dynasty Platoons. Not everyone who went through the training was formally incorporated though, and despite showing promise Dalia Gour originally was left as one of the ones who was viewed as passable, but not drafted into a platoon.

Returning to her duties in the Commissary, she continued to perform with care and attention although did not stand out. Fortunately her time would come when Jequin Hos refused to board the Dark Eldar vessel Promise of Agony without a sufficiently regal-looking honour guard. Going through the names of prospective but undrafted soldiers, he selected Dalia to lead his impromptu honour guard as someone who hacks up meat in the kitchen would logically be able to apply those talents to hacking up anyone who got too close to him, all she needed was a better class of axe.

Despite the randomness of this appointment, she has risen to the occasion and now fearlessly accompanies the Lord Captain in all formal situations. 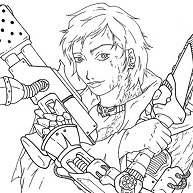