A Xenos Construct that absorbs any knowledge from its surroundings

These mysterious creatures have been seen in a few locations in the Koronus Expanse over the centuries, but not many reliable accounts have been found. This is likely due to their insidious method of attack – as well as hitting their targets with overwhelming force, they erase any information they come in contact with be it biological or mechanical. Anyone who survives the initial encounter with one often forgets that they were under attack, leaving them easy prey for a follow-up attack.

These creatures were encountered on Cog attacking the Cogitators and wiping the Forge Moon clean of its records. When discovered by Explorator Felicis, one of these creatures was more than sufficient to down the Tech-Priest and devastate the team of Death Bastards escorting him. They then attempted to reach the central power core, but were downed by a combined action through the Hos Dynasty. Upon death, their central body winked out and the crystals orbiting them fell to the ground, many shattering on contact and those still intact showing no sign of life.

The Crystalwisp were first encountered by the Inner Council on the Forge located on Cogs. They are able to fly and attack using his tendrils. They seem to be able to in the attacks drain power out of electrical devices. In addition when they hit the apparently erase the memory of the person who was assaulted.

One thing to notice it is that although they are deadly in close combat, at longer ranges they are unable to defend themselves. Massed fire from the Death Bastards was able to fell 3 of 4 Crystalwisps. As well high damage plasma shots are able to ensure they are taken down. My opinion is to attempt to engage at longer ranges with massed fire. If in close combat attempt to disengage and set a base of fire against them or use another group to fire as you withdraw. 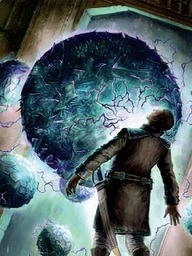