Current Chief Sculptor on the shrine moon of Silence.Skilled yet Hermit-like

The leader of the artist’s commune on Silence, much as his predecessors before him Frohwein enforced the seclusion of the artisans working on the low-gravity moon of Svard. When the crisis of Svard hit, Svard Prime attempted to contact the group living there without success. Subsequent investigation by the crew of the In Purgatio Lumen discovered Frohwein and all of his artists dead, their bodies posed in a macabre fusion with the statues they had created.

Was apparently an excellent sculptor. Was the leader of the artisan commune on the planet of Silence. Was found dead. His head was found on a sculpture he had created. His body was found in his bedroom. It seems that he may have been reading with proscribed text, as a book identified as The Eris Transform was found in his possession, and I have determined it to possess a noticeable warp taint. The only copy was found in his room. How it came to be on Silence is still a mystery. 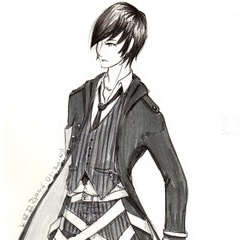