Former Freebooter encountered in Grace System. Then he had to split.

The one-time Captain of Da Ship Eata, he was encountered by the Hos Dynasty early in their arrival in the Grace system. His Frigate had set up an ambush in the shadow of a Gas Giant, but was detected by the powerful sensors of the In Purgatio Lumen. Identifying himself as a splinter group from another band of Orks deeper in system, Lord-Captain Jequin Hos invited the Orkish Freebooter aboard to discuss a possible alliance. Unprepared for the Xenos mindset, he was taken offguard by how the Ork Kaptin insisted that the Lumen was now his property.

Despite passionate negotiations and devious trickery, it eventually devolved into combat where Captain Hos used his “Purified” Chaos Axe to easily slay the massive Ork, causing the remaining crew to swear loyalty to their new Warboss.

His position of Kaptin for Da Ship Eata was succeeded by Kap’n Chaintusk. 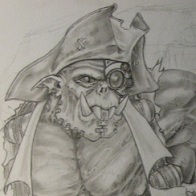