The New Kaptin of Da World Eata, through the standard Ork Method

Originally a part of Kap’n Hammertoof’s crew boarding the In Purgatio Lumen in the original boarding action in the Grace system. Following his Kaptin’s brutal and sudden death at the hands of Jequin Hos and his deadly Axe.

After executing another challenger for the position of “New Kaptin”, he swore allegiance to Jequin Hos as their new Warboss. He has provided information on the situation in Grace. Following the action on the Dagger of Fate he is now convinced that he is responsible for the murder of tens of thousands of Orks. The Dynasty’s promise to keep this a “secret” has apparently bought his loyalty for the time being.

Having watched Captain Chaintusk he seems to be eager to follow us. Although he seems to be more eager for fighting and cracking skulls. I would also notice that he is not exceedingly smart. He proclaimed a human as an Ork Warboss. As well we have convinced him that he has killed hundreds of thousands of Orks on the Dagger of Fate.

I would agree that he and his Denis have uses. But we must be wary not to push our luck in attempting to command the loyalty of these Denis. As long as he can fight he will likley be happy but when he finds no fight he will most likely attack us. If this is the case we should preempt this. 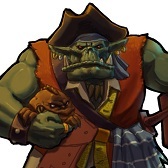