A giant muscle-enhanced brute of a man, he is the nominal leader of the Black Brotherhood on Footfall. Sought out by the Hos Dynasty for information on Krawkin Feckward. He’s indicated that the Black Brotherhood may engage in unsavoury and illegal trade if they were in the Imperium, but even he is disgusted by Feckward’s apparent complete lack of a moral code.

He is perhaps notable for being the only NPC that has managed to “win” a social battle against the Dynasty: forcing the Navigator and the Arch-Militant from his premise, and quite literally slamming the door in Captain Hos’ face.

Their next interaction went much smoother, with Captain Hos contracting the Black Brotherhood to provide security for their new space station and burgeoning colonies in the Inti system, as well as providing the less-addictive narcotics and relaxants so that the colony would have a healthy way of releasing their outrage – or so it is hoped.

He was later contacted by the Hos Dynasty to set up a meeting with the Kasballica Mission so that their Dark Eldar equipment could be offloaded, at which point he was caught up in the assault by unknown forces on Footfall. 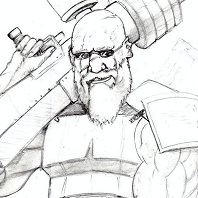