Hereditary governor of Damaris. Not suited for it

Democracy is a rare thing in the Imperium of Mankind, and the standard method of determining an Imperial Governor is the a simple hereditary inheritance. This frequently produces less than optimal rulers, including Belkan Kapak. Originally fourth in line for the position, he was expected to wile his time away on a lavish estate and a generous allowance to spend on his own amusement, generally procured off-world by Rogue Trader Elizabeth Orleans

Unfortunately a failed coup by the second child resulted in the death of all three immediate successors, leaving him unexpectedly thrust into power. He has made no secret of his inability to rule and prior to the crisis of Damaris he relied heavily on the advice of Rogue Trader Orleans. With the advent of the crisis however, he has been seeking a third party to take command of the situation, and spends the majority of his time in a pleasant Obscura haze, attempting to avoid responsibility for his actions.

He was later deposed in a military coup by General Remi Dante, and retired to an estate to wait out the battle.

Governor Belkan Kapak seems to be entirely unsuited for the current stress occurring in the Damaris System. He is unable to control the diverse interests fighting to protect Damaris. As well it should be noted he uses lots of Obscura and liqueurs and various other intoxicants as a crutch. We should perhaps attempt to have Lord Hos in position to take over given the Governors reluctance to actually govern, he would likely readily give up his powers if we can convince him. The lack of control also seems to have and effect with the other council members resenting him and the lack of direction being given to the forces defending Damaris. 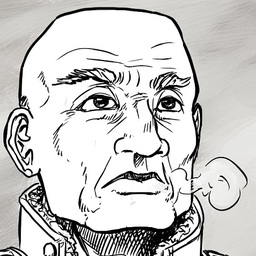