Chaos Champion. Had high ambitions before falling in battle.

The captain of the Rending of the Innocent, he was attempting to ambush and capture Imperial Citizens in The Battleground for sacrifice to the Runious Powers. Although adept at capturing Pilgrims trying to make their way through, his forces were completely unprepared for a vessel as powerful as the In Purgatio Lumen. With one of his escorts destroyed and the other crippled, the Explorers stormed his vessel and despite landing a furious blow on Astropath Eckhart, he was swarmed by the Death Bastards allowing the Astropath to land the killing blow.

Such is the fate of all heretics and enemies of the Imperium. 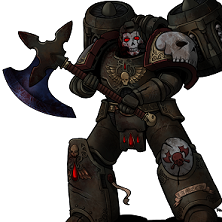