Former Admiral, he still acts the part of a Navy Officer.

Born a distant scion of an ancient Rogue Trader House, Bastille was never viewed as a serious challenge to the Rogue Trader Warrant. Having a commission purchased for him in the Imperial Navy, he managed to rise through the ranks through solid if unspectacular talents. His largest career advancement was when he defeated the Orkish invasion of Weyburn through taking advantage of his fleet’s greater mobility and range to destroy the Ork Roks before any could land on the planet without taking a single casualty.

His fortunes changed suddenly when the bulk of his family was killed through a freak accident involving a Vortex Torpedo during their decennial meeting. As he was on the outskirts of his family’s inheritance and busy serving with the Battlefleet, he was not in attendance and thus became Rogue Trader by default.

As the Admiral was busy battling Chaos heretics in the Jericho Reach at the time, whispers began to grow of a dark pact he struck with the forces of Chaos to destroy his family in order to grant him the Warrant of Trade. Slowly but surely, a cloud of suspicion settled over the Lord-Admiral, despite no evidence being found. With his former allies in the Imperium now unwilling to associate with him and his authority being consistently undercut by other Rogue Traders, he left for the Koronus Expanse where he has stated his intention to prove himself a man of honour still. 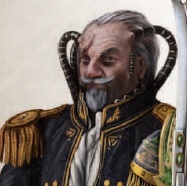