All Orks Need Minderz. At least if they can kill you all with a stray thought

No Weirdboy would be allowed out on their own without a cadre of loyal, incredibly stupid Orks who do not realise the danger of attempting to control a creature who kills anyone with a stray thought. Barka Da Squigcalla has two such loyal minions, as well as a pet Squig! Hurray!

Grig and Grog are two interchangeable Orks with the job of lassoing the Weirdboy if he attempts to flee from combat. Silent and steadfast, when not in combat they can usually be found on Facebook. Each of them grabs a book, and then slams it against their face in an attempt to break it. If they succeed, then the other one must eat the book. They spend hours just idly Facebooking away, and accomplish very little in the meantime.

Always accompanied by his faitfhul pet Squig Bliggy, the Squig himself is a typical Orkish specimen, in that he is some sort of hideous monster whose jaw appears to take up more body mass than the rest of the creature. Despite the fact that Bliggy appears to change in appearance every time he’s seen, and members of the crew swear that the Squig has been killed on at least one occasion, Barka always has his faithful pet Squig onhand.

Bliggy appears to have developed a taste for Dark Eldar meat following the confrontation on the void station, and carries around the pelvis of the Dark Eldar Wych he slew, even though such a thing should have disintegrated in his jaws long ago. 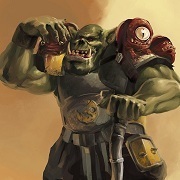