A pirate raider who throws his support behind the strongest Captain

A pirate formerly in the service of Silbannacus Jacobus operating out of the Inti system. Following the failed ambush of the Hos Dynasty, his Raider – Jacobus’ Pride – was badly damaged by the In Purgatio Lumen. After his “admiral” was swallowed in a warp drive explosion, he cheerfully surrendered his vessel to the Hos Dynasty and swore loyalty to them in exchange for not being killed.

An unrepentant sycophant, he has maintained control of his vessel, renamed the Vagaries of the Warp. He was more than happy to inform the Hos Dynasty of all the pirates’ gathered treasure and information, and has enthusiastically supported their efforts to take control of the Inti system. Whether or not he can be trusted in the long term has yet to be seen.

Captain Augustus Herst seems to be an easily suggestible type. Especially when an opponent has power over him (be they guns, or Navigators). He seems to grovel much and views keeping his head on his shoulders as his most important duty. I hope he displays more loyalty to the Hos dynasty then his previous ‘Admiral.’ It may be advisable to find people in his ship who would be more reliable if necessary to retake the newly named Vagaries of Warp. For all this suspicion he has been so far enthusiastic in helping the Hos Dyanasty in convincing the other Captains to surrender, giving information about the pirate activities, and the Inti systems planetary traits. 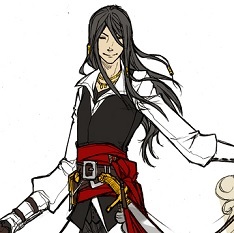