A menial on Cog, he was one of the few to survive the purge

One of the few menial workers on the Forge Moon of Cog who survived Magos Zinoviev Tevla’s purge of the facility following the apparent revolution of the labour workers on the Forge Moon. Explorator Felicis eventually identified Xenos constructs known as Crystalwisps in the facility, and once they were purged he agreed to return to work under the Magos – though was not thrilled by the idea. 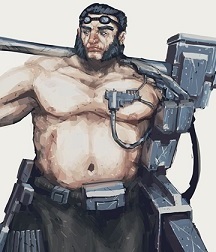