Head Astropath for the Rogue Trader and Crew. Attractively weird.

Bonuses/Penalties
+1 to Initiative Rolls
-5 to Intelligence Tests when not in “proper” hab or hab-like conditions
-10 to all Survival Tests Outdoors
+5 to Willpower and Fellowship Tests made aboard the ship the character lives on.

Tithed at a very young age from Fenksworld, Breia grew up in service to the Ecclesiarchy until an Orkish invasion fell upon the station in which she served. Slaughtering their way through the Clerics and support staff, when they fell upon the young girl her screams were said to flay the skin off of the very Orks that assaulted her, as well as everyone else unfortunate enough to be in the vicinity.

Brought to Holy Terra for examination, she quickly proved herself strong-willed enough to undergo the Soul-Binding to the Emperor, and has since proceeded to serve the Imperium in all aspects as required. When Jequin Hos began assembling a fresh crew free of any potential confounding influence from his Dynasty, she seized her chance and used her Battlefleet contacts to acquire a senior Astropathic position aboard the vessel. Believing this is a chance to spread the Emperor’s Light into the dark region of the Koronus Expanse, she will faithfully and loyally serve the master of the In Purgatio Lumen.

A striking young woman, she has borne the soul-binding rite with little damage to her body, and her appearance and demeanor mark her out as more than attractive at first glance. She is intensely proud of her soul-binding to the Emperor however, and refuses any form of mask for her eyes, acting at all times as though they still function normally. She harbours a deep suspicion of Astropath Eckhart, whom she views as holding ideas above his station, as well as flaunting conventional protocol by asserting himself as first officer aboard a star vessel – an occurrence almost unheard of in the Imperium. 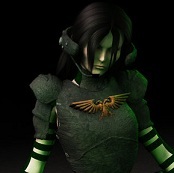