An Astropath whose loyalty to his cause is above all reproach

The Senior Astropath in the Svard system. When Warden Mathieu Riek rebelled against the Astropaths of the Citadel of Psykers he secluded himself along with the surviving Astropaths in the upper garden. Noticing that the Administratum scribes who prayed to the Emperor when faced with their deaths seemed to cause some confusion among the possessed troops, he began a low-level Astropathic sending inside of the System in the hope that he could disrupt whatever control was going on.

Whether or not his actions had any effect is unknown, but it is assumed that the Wardens should have been able to overrun his position before Astropath Eckhart’s arrival. Although Astropath Lhaden died in the defense of the Citadel, her death convinced Astropath Eckhart that all was not as it seemed and he incapacitated the remaining wardens. Afterwards, Eckhart made contact with the Senior Astropath to bring him out of his trance safely.

After rest and recovery, he has resumed his vigil at the Citadel of Psykers. 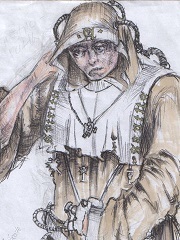