Cold-Hearted Trader, ruthless in her desires and her ambitions

Skilled in Command and Intimidation, she is a more than competent fighter but prefers to surround herself with people who are willing to obey her command to do that for her. Despite her demeanour, her ability to enforce standards across her fleet ensures that she will rarely be confronted alone, but if cornered will use her power sword to devastating effect against her enemies.

Though an objectively attractive woman, viewed in person there is something cold and unapproachable about Aspyce Chorda. She is a pale, thin woman of middle age with an odd grace to her movements that leave all in her presence slightly uncomfortable. Her flawless appearance belies the access to the various treatments that leave her youthful, while her cold, grey eyes speak to the years she has seen, and the single-mindedness with which she pursues her goals.

She is the third of six children to Hamish Chorda, previous holder of the family’s Warrant of Trade. When the flagship of her family disappeared along with her father and eldest brother, she pursued a campaign to secure herself as sole heir to the Chorda Warrant. Her remaining siblings did not challenge her ascension, and have not been heard from since she took the dynasty.

She has risen to the ranks of one of the wealthier and more influential Rogue Traders in the Koronus Expanse, commanding one of the largest fleets in the region. She has an unerring ability to reap benefits of her vastly risky endeavours, and yet when they fail as most do, her partners that she signed on for these endeavours are the ones left destitute.

One early venture in her career had her hire many of the senior House Pazzano members in an attempt to chart new Warp Routes through the Koronus Expanse. The House agreed, but the majority of the expeditions vessels vanished in the Expanse, never to be seen again. Chorda successfully argued that this was due to the failure of the Navigators, and in one fell swoop the House lost most of its senior members, as well as being forced to rebuild the ships that Chorda had “lost”, many of which were old and in serious need of repairs that were scheduled for immediately after the expedition.

Following the conclusion of The Winterscale War, Aspyce Chorda’s position in the Expanse has been greatly reduced, and the Rogue Trader heself has not been seen since her retreat over Maleziel. Most of her forces now rest solely in the hands of Calligos Winterscale.

She recently resurfaced on Lucin’s Breath, and attempted to aid Shas’Saal T’olku Fir’hon in keeping his people safe from the predations of the void. She helped ferry them to a small Xenos coalition that had banded together to survive the Imperium. She seemed to ask no payment, other than requiring Shazzy remained with the Hos Dynasty for the foreseeable future. She also appeared to know the fate of Jequin Hos, but was uninterested in the machinations of the Rogue Trader, as well as a possible alliance 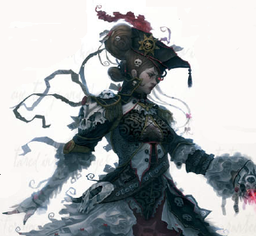