The Captain of the Hostile Transaction. Ersatz Dynasty ally.

A captain of her own independent vessel, she was a smuggler and slaver closely allied with Salaine Morn in the Nexus of Shadows. When the Archon was deposed from the city, Shen found her status greatly reduced, and she was herself captured and cast into slavery.

Her and her crew survived for years in the slave pits, utilizing her knowledge of the workings of the city to keep them intact and together, but she was never able to use her knowledge to escape before the coming of the Hos Dynasty. They earned entry to the Tournament of Champions, and accompanying alongside, confident that she knew a way to escape. True to her word, as they progressed through she found an escape hatch built into the maze, and the Hos Dynasty followed her to freedom.

Her initial plan to retake her ship and escape the Nexus was thwarted, and she was forced to bide her time until Salaine returned with a plan to re-take the Nexus for herself. She was not an active participant in the rebellion, but once the reign of destruction in the Nexus began, she guided the Hos Dynasty to the core of the planet and her vessel, leading the claiming of three void ships for their own.

Her vessel, equipped with an Archeotech navigation system, handily reached Lucin’s Breath before the Hos Dynasty, where she left them a small cash stipend and information on where to head next, before presumably moving on with her own goals. 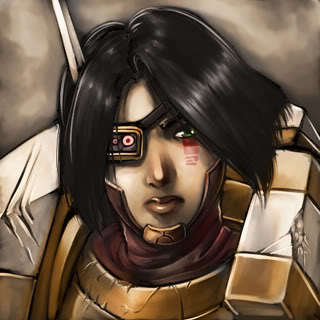