A Novice Captain who rose to the occasion fighting the Yu'Vath

The captain of one of the Svard Defense Force Frigates, he accompanied the In Purgatio Lumen and the Hand of Redemption on their mission to the Svard Promethium Refineries mostly to show the citizenry of Svard Prime that their own forces were participating in the fight for their freedom. The more experienced Captain Lindsay Garret was left behind in defense of the homeworld, and Cassis was intended as an auxiliary role in any battle that was to take place.

He exceeded everyone’s expectations when the threat behind the Svard system was revealed to be a gigantic, Xenos construct. Although his Frigate was no match for the larger, more powerful ship he nonetheless threw himself into the combat. Outright destroying two of the escorting Void Wasps, and finishing a third off after it had been weakened his stalwart defense of the two other Imperial vessel’s flank allowed them to focus their firepower and ultimately defeat the Yu’Vath vessel.

In the recent battle in the Damaris system he has proven his worth yet again. A clever and smart captain he dragged the Eldar into attacking his ship, all the while exposing the flanks of those pitiful xenos, which saw them decimated. This proves the dictum “The battle is won by positioning.” He shall be given a medal for his tactical brilliance, the Hossian Medal of Tactical Leadership. 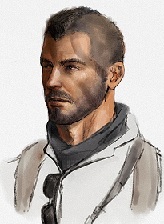