A Nobleman's son who was caught up in the riot and pleaded for calm.

Exclusion is a place that tends to be home to two people: Those that have been sentenced to labour for their transgressions and those who have been sent by wealthy parents that want them to misbehave. Anthony Kvist was one of the rare third breed, one who volunteered to come here to learn to liaise with the Arbites and connect with people from various walks of life in Svard. The son of Councillor Otto Kvist, he’s a soft-spoken man who appears to leanings towards Imperial control, but in general respects any chain of command or authority within reason.

During the riots on Exclusion, he was one of the native Svard visitors who supported the Arbites in their decision to leave the Prisoners behind until the Svard Defense Force Frigates could arrive to evacuate them. After Vartan Andreev and Raoul Anwell were implicated in the death of the Arbites Senioris on the planet, Anthony became the point of contact for Arch-Militant Caine when dealing with the prisoners.

After the situation was contained, he departed along with the remainder of the citizenry of Exclusion for Svard Prime. 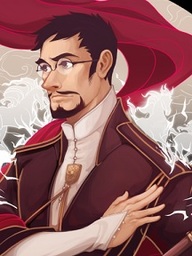