Chief Confessor of The Divine Flame. Has problems controlling his voice.

A large, quick-to-anger man he is the leader of the Cult of the Divine Flame aboard one of the void stations of The Hermitage. He is a firm and vocal believer in the impossibility of redemption and that the only salvation to be had for heretics is at the business end of his Flamer.

Either without patience or skill for diplomacy, he yells at any who would oppose his certainty of what faith in the Emperor would look like. He recognises that the Imperium cannot survive without Navigators, but the services of Navigator Crayn come very grudgingly.

Although the Explorers rescued a number of his followers during the Action at the Battleground only time will tell if this has improved his belligerent attitude.

I met Confessor Animus Todd on-board the Hermitage. He and the Divine Flame seem to be pious enough. It appears that he doesn’t tolerate any mutation. Including those divinely anointed by the Emperor. Although I agree with the zeal expressed by Confessor Todd, he lacks due respect to Navigators. I note the unpleasing attitude to my self and what appear possibly abuse to Navigator of House Crayne on board the Hermitage. In addition I note the Confessor and Arch-Militant did not get along. Each seemed to provoke each other and not recognize each others authority from the God-Emperor.

I believe that a working relationship with The Divine Flame is possible.We will need to have a working relationship in which we continuously prove our piety. It seems Confessor will refuse to speak to any mutant (include those who are righteously guided by the Emperor), or possibly psyker. I recommend that next time more ‘normal’ crew are used to negotiate with him. As well intimidation doesn’t seem to work, my suggestion would be flattery and obfuscation of the issues. Use crew who are less volatile and hard headed then our Arch-Militant (he is not a negotiator). I think theologically the Divine Flame are on secure ground, but the methods they use in interaction with Servants of the Holy Throne leaves much to be desired. 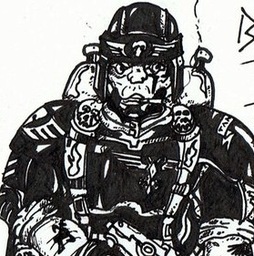