A ship captain who defected to Winterscale, and rose in power.

A Captain in the service of Aspyce Chorda. He was tasked to lead the Grace Salvation Fleet once the Warp Storms had abated. Arriving in system, he arrived after Jequin Hos and his crew had cleaned up both the Ork and Dark Eldar menace in system and claimed the best loot for themselves.

As the In Purgatio Lumen left the system he sent a number of Astropathic messages to Captain Hos, informing him that the CHorda Dynasty had re-asserted its claim over the Grace system. He cautioned the departing Rogue Trader that if he had violated Chorda’s domain there would be consequences, but otherwise did not impede their departure.

During the first Winterscale War, he orchestrated a mass defection among many of Chorda’s allied captains over to Calligos Winterscale, an action viewed by many as being the final action that caused Chorda to abandon her claims in the Koronus Expanse and escape 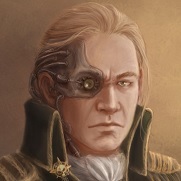