A native of Svard, Anette Klabund was trained as a Verispex under the Adeptus Arbites stationed at Exclusion. Her duties involved the investigation and processing of data from crime scenes and other points of interest in the non-Imperial colony. She was the one who processed the death of Adeptus Senioris Smith at the behest of Arch-Militant Zacharya Caine. She identified that there were six people responsible for the death, but Caine could not reconcile that Vartan Andreev deserved to die for this, as he was entirely without intent or anger towards the situation. Caine omitted Andreev from his report to the new Adeptus Senioris, and surprisingly Klabund’s report supported that version of events.

When Caine questioned her about this omission later, she admitted to being complicit in the deception, but that she was also not prepared to embrace the harshness of Imperial Justice even if it would get her what she wanted. She agreed to keep the confidence of the Arch-Militant. 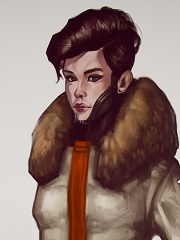