A member of Zacharya Caine’s personal Hos Dynasty Ship Platoon, she was charged with overseeing the care of the Arch-Militant while he underwent augmetic surgery on board Port Wander. Following his recovery, she was present for his investigation into Aurora Neena, although was often absent during the major combat actions.

She is aware that she is overshadowed by Zacharya’s incredibly martial prowess, to say nothing of his new built-in systems, but she respects and follows the Arch-Militant’s commands without question, and hopes to one day be considered his equal in combat.

She was present with Caine during his investigations at the behest of the Imperial Inquisition Acolytes. She survived a demonic attack on the Venture of Uncertain Returns, and was instrumental in defeating the agents of The Beast House. 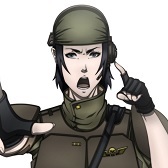